You have probably heard that Pheasant Run will no longer be hosting the Chicago Pipe Show. We are currently in the process of searching for and evaluating a new venue for this year’s show and for the future. We will immediately post further information as soon as a new venue is secured. Please check back on our website periodically to keep informed. The Chicagoland Pipe Collectors Club regrets any inconvenience that any of our attendees and visitors may be experiencing during this trying time. The club was only informed of Pheasant Run’s inability to host this year’s show a few short weeks ago and we have been diligent in finding another adequate venue.

The CPCC is very aware of the situation at Pheasant Run.  We have requested information regarding the 2020 Pipe Show but currently it isn’t forth coming.  Other venues are being approached to see if they would be willing to host the show.  Be assured that the CPCC will do everything it’s power to make sure the 2020 Pipe Show happens.  We will keep you posted as further developments unfold.

Please review the document linked below. One of our fellow collectors and eBay sellers had several high grade pipes stolen. We would appreciate any help you could provide in locating these pipes. If you see them for sale anywhere, please reach out to the authorities mentioned in the document.

Smokingpipes.com posted a wonderful blog entry about Lars Ivarsson and his annual attendance at the Chicago Pipe Show. Please be sure to read the tribute posted in the smokingpipes.com blog found here: https://www.smokingpipes.com/smokingpipesblog/single.cfm/post/one-last-gift

I won’t even attempt to write a piece as nice as the one they posted. Please be sure to check out this special pipe during this year’s silent auction on Saturday. 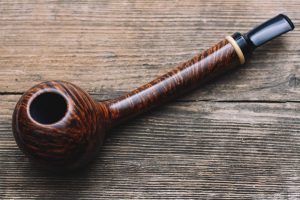 Michael W. Reschke, President of the Chicagoland Pipe Collectors Club, Doctor of Pipes, and Assistant Show Director of the Chicagoland International Pipe and Cigar Show. Mike died today after a battle with lung cancer that began last fall. Mike was the first CPCC President of the Club beginning July 1, 1998, and has been re-elected every year since (except July 1, 2005) including this year’s annual election for a term beginning July 1, 2016. Mike received the Doctor of Pipes Award, in the hobbyist category, at the Chicago Show in 2006. He served as Assistant Show Director from the first Show through this year’s 21 st Show. Mike was the epitome of the pipe smoking gentleman. He was a friend to all pipe smokers, and the best friend to many. He devoted many, many hours of his life to the pipe smoking and pipe collecting hobby. The CPCC and the Chicago Show will never be the same without Mike, and his wonderful smile and charming wit. We will always miss him.

The wake for Michael Reschke will be held at Steuerle Funeral Home, 350 S. Ardmore Ave., Villa Park, IL on Thursday, June 16th from 3 to 8 pm. The funeral will be on Friday, June 17th at 11 am. Please click the link above for details.

The Chicagoland Pipe Collectors club is proud to announce the election of the 2016 Doctor of Pipes:

Both of these Gentleman ars highly qualified for this honor, and both will be a great addition to the CPCC Doctor of Pipes Program.

On Friday, April 29th at the show, we are proud to announce that we will have the creators of an exciting video about pipes and pipe making, a presentation of FATHER THE FLAME, a 20 minute preview of the full length documentary. Father the Flame will be a feature-length documentary about slowing down, embracing life, and learning something in the process. It’s also about tobacco pipes.

It will delve into the modern world of the pipe culture, explore the historical journey of the tobacco pipe, and show the making of a pipe from harvesting briar in Italy, to a finished pipe made by a craftsman in a remote corner of upper Michigan. Through interviews, narration, and cinematic imagery, the film will explore the timeless and transcendent nature of pipes.

We hope to have the entire documentary at the 2017 show.

Showings at 2 P.M. and 4 P.M., followed by discussion and questions.

During this day long course, you will sample component tobaccos, learn the basics of how a blend is made, learn how condimental tobaccos effect a blend, and create your own blends. Each participant will leave with at least 1 pound of blended tobacco, 6 clay pipes (or you can use your favorite smaller pipes for testing), and the knowledge to make that blend that you already love just a little better. The course will be led by Brian Levine of Sutliff Tobacco Co. and Per Georg Jensen of Mac Baren Tobacco Co. We are going to get “down and dirty” and smoke a lot!!!

WE ARE LIMITED TO A MAXIMUM OF 32 PARTICIPANTS!!!

To make your reservation for this seminar, contact Tom Dinelli at tdinelli633@gmail.com

We would like our participants to pre-pay for this seminar. Payment information will be sent back to you via email if your reservation is accepted. Remember, we only have 32 slots open for this seminar!!